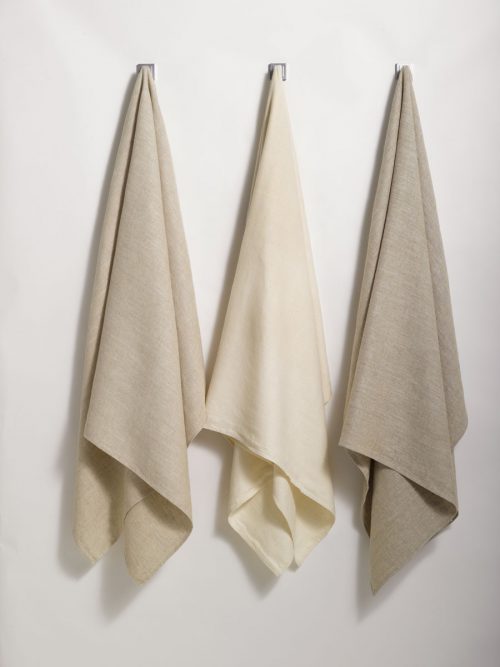 In the last few years, we have seen a resurgence of interest in linen. From clothing to home textiles linen has reappeared. There are many reasons for this. It is a green material, it lends itself to a natural look, and it is durable. The next turn for linen has arrived, and with that is the re-emergence of the linen towel.

Linen has long been used for bath towels. In Europe, flat woven linen towels are not uncommon today and, in fact, are the norm in many countries such as Italy and in Eastern European countries like Lithuania. They are also the original towel. As with most old forms of textiles, there is reason people used them long ago: they worked and they lasted forever. This couldn’t be any truer of our ANICHINI linen towels.

I also grew up with linen towels, which makes me an advocate for many reasons. I know first hand the longevity of these towels. Whenever I go home to Vermont, I use the same linen towels that my mother dried me off with when I was a baby. It still amazes me that they look the way they did when we bought them: elegant, clean, and luxuriously timeless. I know how they feel and I know how cotton terry towels feel and the level of clean and calm I get from using a linen towel can’t be beat. And I am not the only one who says this. All friends and family that stay at my home all want linen towels when they leave.

I realize that most Americans  have a hard time letting go of what they are used to: fluffy cotton terry towels. People are concerned that the linen won’t be as soft. Linen, being a natural fiber, will get softer as time goes on. But I think what people mean is they are going to miss the plushy terry. They think that linen won’t be absorbent. This is false. Have you ever tried to dry off a piece of china or stemware with a terry wash cloth? Try it. You will notice that the water just  swirls around. Essentially, that is what you are doing to your body. Of course, the cotton terry towel will absorb a lot of moisture, but it also leaves a lot of water to evaporate on the skin, which can cause dry skin. Linen, on the other hand invigorates the skin, circulating blood flow and giving your skin a more healthy appearance. Linen is a natural exfoliant.

In addition, terry has a very difficult time drying once it is wet. Linen towels are naturally antimicrobial so they don’t become  “sour” like terry can (especially in the summer with humidity). They are classic and modern at the same time. They speak to all ages and all times. And they are a green product. Terry takes a long time to dry not only after you use it but also after you wash it. You also can only fit about 4 terry bath sheets in a washing machine at a time. You can more than double that load with linen bath sheets. On top of that, you must dry terry  on medium to high heat, which eats up energy. Linen can be air dried or tumbled shortly to dry and they look fantastic.

Give the linen towels a try. See how you feel. See how you look. See how much longer you can use them and how much energy you save to clean them. It is a green product that is good for you and the environment. The world is catching on… 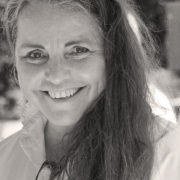 ANICHINI FOUNDER, SUSAN DOLLENMAIER EXPLAINS HER LIFE AS A SEARCH FOR THE GENUINE ARTICLE. HER LAID-BACK, EARTHY STYLE IS IN SHARP CONTRAST TO THE HIGH-PACED WORLD OF LUXURY LINENS AND TEXTILES SHE HAS CREATED. SHE PURPOSELY CHOSE TO PUT ROOTS DOWN IN RURAL VERMONT, AND TO GROW THE GLOBAL ENTERPRISE OF ANICHINI THERE. SUSAN IS AN EXPERT ON TEXTILES. ALL THAT SHE LEARNED ABOUT TEXTILES, INCLUDING THEIR ANCIENT ORIGINS, ACTUAL WEAVING TECHNIQUES, HISTORY, AND THEIR HUGE ROLE IN CULTURE IS SELF-TAUGHT.

From Selling Antique Linens From A Suitcase…