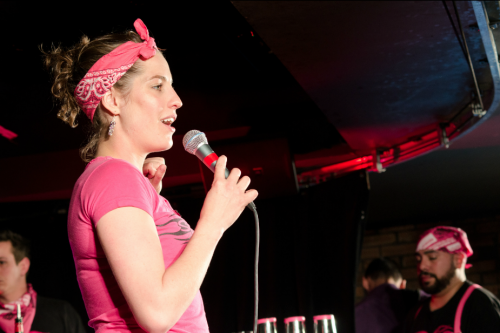 ANICHINI is a proud supporter of this year’s Speed Rack National Finals which take place on May 16th in New York. Speed Rack is an all-female speed bartending competition whose proceeds all go to benefit breast cancer education, prevention, and research, and is co-founded by Ivy Mix, daughter of ANICHINI founder, Susan Dollenmaier.

Over the last 2 years, Speed Rack has raised close to $150,000 for breast cancer charities, and in the past 2nd season, has raised nearly $75,000 for charities including Share Cancer Support, National Breast Cancer Foundation, and Army of Women.

This year, Speed Rack has traveled across the country to 10 different cities, meeting over 200 female bartenders who have poured their hearts, souls and favorite spirits into Speed Rack. In each of the regional heats held in 10 of the top cocktail cities in the nation, only 10 City Winners plus 6 Wild Cards that were voted for online have qualified to compete in the Speed Rack National Finals.

Join us on May 16th, 2013 at the East Village’s Element to watch this year’s finals and to help beat Breast Cancer. Donations and ticket sales include complimentary cocktails and punches as well as tastings from premium spirits partners. There is also a raffle for a chance to win fabulous prizes, including gift certificates to ANICHINI for $300. We hope to see you there!

The Latest Look: Table Linens in our New York Showroom

Susan Dollenmaier May 4, 2012
About ANICHINI